Today the company manufactures and markets a range of Australian brand icons in the health and beauty markets of the Consumer Packaged Goods sector. Our major customers are Woolworths, Coles, Target, Big W, Metcash, Priceline and pharmacies across Australia.

Our office is located in Frenchs Forest. Since incorporation, the company has always used sales brokers and contract manufacturing and as such was ahead of its time. Subsequently we have a relatively small number of employees.

The company keeps abreast of all technological advances to ensure its employees are armed with the resources to maximise performance. The company has enjoyed a strong growth rate and has a solid record of organic and acquisitive growth in both revenues and operating profit.

The company has a strong focus on consumer needs and supports its branded portfolio strongly in terms of Marketing, R&D and sales support.

Over one hundred and seventy years ago, in 1846, two natives of New England took the first step toward establishing an industry that has since become of national importance in the US. Baking soda, which is a common name for bicarbonate of soda, is now found in practically every kitchen throughout the U.S. and is regarded a necessity by millions of Americans. It was first prepared for commercial distribution by two early New Englanders, John Dwight of Massachusetts and his brother-in-law, Dr. Austin Church of Connecticut.

Dr. Austin Church was born the year George Washington died, 1799, at East Haddam, Connecticut. He studied medicine at Yale, and received his doctorate in 1823. After marrying Nancy Dwight, he moved to Hartford, Connecticut, and later lived in Rochester, New York.

John Dwight and his brother-in-law, Dr. Church, started the manufacture of bicarbonate of soda in this country in 1846. The first factory was in the kitchen of his home with baking soda put in paper bags by hand. (Today, the pure bicarbonate of soda is processed and packed by highly specialised modern machinery and reaches the consumer never having been touched by human hands.)

At Church & Dwight, we study consumers, uncover insights, and turn those insights into new products.

HISTORY OF THE LOGO

The ARM & HAMMER logo was first used in the early 1860’s by James A. Church, the son of Dr. Austin Church, one of the U.S. founders of our business. James A. Church operated a spice and mustard business known as the Vulcan Spice Mills. In Roman mythology, Vulcan, the god of fire, was especially skilled in fashioning ornaments and arms for the gods and heroes. The ARM & HAMMER logo, therefore, represented the arm of Vulcan with hammer in hand about to descend on an anvil.

In 1867, when James A. Church joined his father as a member of Church & Co., he brought along the ARM & HAMMER trademark. He began to use it on some of the baking soda packages that were being sold under various name labels. After a period of time, more people requested the package with the ARM & HAMMER logo on it than all others and the ARM & HAMMER brand became our primary trademark.

Originally used exclusively on our baking soda packages, the trademark now identifies an array of quality consumer and specialty products in use throughout the world. Today Church & Dwight Co., Inc., strives to continue its tradition of providing products of high quality and performance that meet genuine consumer needs. 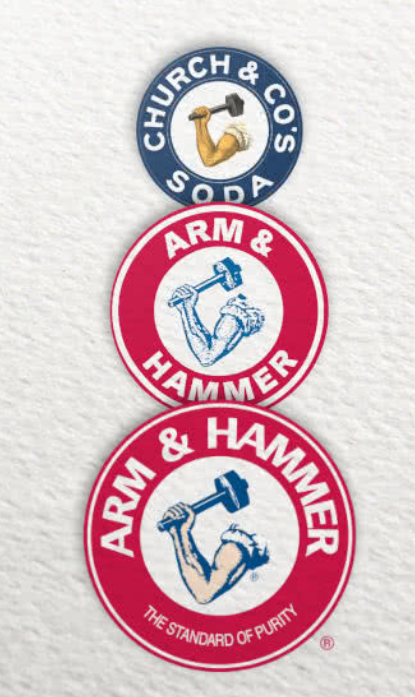